This past Saturday, my son and his high school jazz band played at the University of New Hampshire Jazz Festival.

We woke up to several inches of snow that morning but the weather soon turned beautiful and sunny. 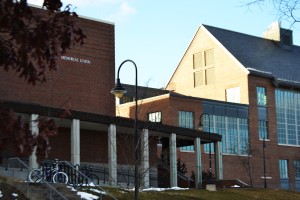 Upon entering Memorial Hall, we were greeted by the rich sounds of all manner of brass instruments. Students scurried through the hallways lugging their instruments trying to get to their performance areas. Abundant laughter could be heard over the music and the energy that filled that space was wonderful. 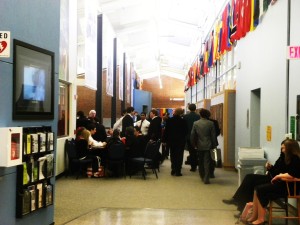 We had a couple of hours until our school played so it was such a treat to listen to the other bands play. The sheer talent of these kids was amazing. I have zero musical talent so I have always been in awe of those who do.

At one point, my daughter got a text from one of Josh’s friends. Josh’s 16th birthday was the following day and some of his friends asked if they could throw a surprise birthday party for him.

Doug and I loved the idea! (And I was so happy that I had tidied up before we left! 🙂 ).

My brother agreed to let the kids into the house to decorate.  Subsequent texts informed us that a cake had been baked, decorations were up, and Josh’s favorite candies had been purchased. All that was needed  was the birthday boy.

But first, he had a concert to perform. The band took the stage and they just blew the doors off the place!

My son comes alive when he holds an instrument in his hands. Music is part of him.

Ray Charles once said, “I was born with music inside me. Music was one of my parts. Like my ribs, my kidneys, my heart. It was a force already within me when I arrived on the scene. It was a necessity for me—like food or water.”

I think Josh would say that is true of him as well.

It has been a joy to watch him pick up his first instrument and discover the music that God placed in his soul.

As soon as the performance ended, we headed for home.

This was my son’s reaction when he walked into the door, saw his friends, and heard a resounding: “SURPRISE!”

He was truly shocked.

The only one who was not enjoying any of this was our dog Buddy. He fled to the comfort of my mom’s arms. 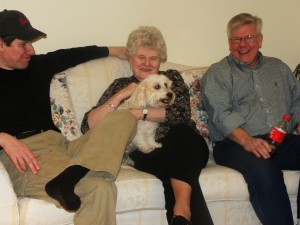 He clearly does not like any disruption in his routine.

Doug, my mom, my brother, and I listened to another type of music that night: the music of laughter as the kids celebrated.

My husband and I treasured the moment because in two short years, our son will be off to college. Our daughter will be here one more year after that and then the house will be much, much quieter. It will be a new season.

It just served as a reminder to cherish this season. This noisy, fun, exciting, sweet, hectic season.

At the end of the night, balloons were all over the place. Most of the cake had been eaten.  Presents had been opened. Buddy finally calmed down.  Wonderful memories had been made.

It was a marvelous day.

2 responses to “Jazz, Surprises, And Joy”