Category Archives: Tribute To My Dad 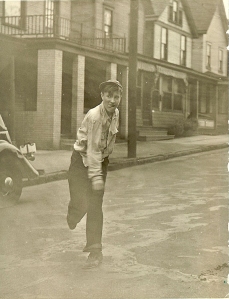 Dad at 13 playing baseball on his street

He was the youngest of six children, was passionate about baseball and dreamed of being a pilot. Due to his bad eyesight, that wasn’t meant to be but he did join the Air Force during the Korean War and was stationed in the Philippines. The photos below were taken on the base: 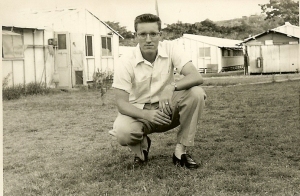 Following his time in the service, he obtained his college degree at the University of Pittsburgh. Shortly after that, he met my mom Mabel on a blind date, and they married on June 16, 1962: 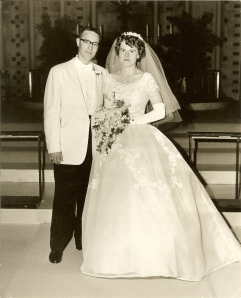 My dad adored my mom. Toward the end of his life, he shared with me that after nearly 40 years of marriage, he still couldn’t get over the fact that such a beautiful lady had been interested in him. I can still remember the faint sound of wonder in his voice and the faraway look in his eyes as he recounted their wedding day.  It was such a sweet moment.

I came along three years later in 1965. Here I am surely impressing him with my mad guitar skillz:

The 70s produced endless opportunities for cringe-worthy clothing, as this photo clearly displays:

I’m not so sure my dad would be happy that I have posted that photo on the world wide web, but this is actually one of the more mild ones that I could have chosen! As I recall, that leisure suit was powder blue. My dad was obviously very secure in his masculinity. 🙂

I loved to hear my dad laugh. Sometimes he would laugh so hard that tears would  just stream down his face. I have that in common with him. This is one of my very favorite photos of him because it so captures his personality. He could spin a story like nobody else:

Another thing my dad was famous for was The Christmas Pants.

Anyone reading this who shared holidays with us is smiling right now because this was always a highlight of the day.

My dad was well-known for being a snazzy dresser. (with the exception of the above 70s photo, obviously). However, on Christmas Day 1987, he made a huge fashion faux-pas when he inexplicably decided to wear plaid pants paired with a shirt that had a wide horizontal stripe emblazoned across the chest. We were all incredulous that he would wear that shirt with those pants and teased him mercilessly all day long. By the end of the day, he vowed that he would wear those same pants every Christmas for the rest of his life…and he did!

Right before coming downstairs on Christmas Day, he would loudly announce: ” The Christmas Pants are about to make their appearance!” Then he would descend the stairs with great pomp to cheers and clapping. It was all just silly fun but we looked forward to it every year. In the photo below, my dad is modeling the famous pants with my mom and our son Josh, who was five:

In 1994, Dad retired as the head of human resources for a branch of the Department of Energy. He was deeply respected by his co-workers as a man of integrity, who was tough but fair, and saw and nurtured potential in his employees. He was excellent at his job because he  was deeply perceptive. He could read people like no one else I’ve ever known. Within five minutes of meeting anyone, he had their number and he was always right. It was almost eerie.

This came in very handy when I brought Doug home to meet my parents for the first time. It didn’t take Dad long to pull me aside and say, “This guy is all right.” I couldn’t have asked for a better vote of confidence. (Not that I had any doubt!).  🙂

Dad was so proud to walk me down the aisle. He knew I would be in excellent hands.

One of the great joys of Dad’s life was becoming a grandfather. Julia had him totally wrapped around her little finger.

Dad and Julia on a bike path in RI

In 2002, my dad began to experience shortness of breath, so he went to the doctor to have a stress test. The results were shocking. Only 20% of his heart was working. None of us could believe it. Dad was a lifelong health nut…he exercised daily, watched what he ate, and took a ton of vitamins. He was the last one we would suspect of having a bad heart.

This was on a Friday and the plan was for Dad to have a bypass operation first thing that Monday morning. We were in New Hampshire and couldn’t get home to Pittsburgh in time. So, that Sunday night, Dad and I had a tearful phone conversation. Knowing the risk of surgery, we didn’t know if this would be our last conversation, so we said everything that needed to be said.

At one point, I told him that I was pretty sure I needed him on earth more than Jesus needed him in Heaven.

I could hear the smile in his voice when he said, “It’s a win-win for me. If I survive the surgery, I get to continue enjoying my wonderful life. And if I die, I go to live with Jesus. See? Win-win.”

He never did have the surgery. Once in the operating room, they realized  that his heart was so badly damaged that he would not survive an operation. So, they sent him home and put him on a regimen of strong drugs in hopes that those drugs would build his heart up to a point where he could have a bypass.

He was released the week before Thanksgiving, so Doug and I made the decision to take the kids and go home to Pittsburgh for the holiday. We spent all of Thanksgiving week staying at my childhood home. My dad looked more frail than he ever had but he was in excellent spirits.

It was a wonderful week. I spent a lot of time with Dad. He shared memories with me that I had never heard before and I asked him a million questions. I think that deep down, we all knew time was short.

Thanksgiving Day dawned bright and sunny and to this day, I remember the laughter. We laughed all day long, especially after all the relatives arrived. I had the videotape going all day long, intent on capturing as many moments as I could. When I watched that tape later, I could see that Dad was quieter than he usually was. At one point, I left the machine running as we sat around the table. I didn’t notice it at the time, but the tape revealed that as he sat at his customary spot at the head of the table, he eyes rested purposefully and thoughtfully on each face, as if he was trying to memorize us, especially his grandchildren.

The next morning, my family and I left early to head back to New Hampshire. As I hugged him one last time before we hit the road, I said, “Bye, Dad.”

He smiled at me, shook his head, and said, “Let’s not say goodbye. Let’s just say ‘see you later’.'” He told everyone that he loved us and we were on our way.

That was the last conversation I had with my dad. He had a massive heart attack later that day and never recovered.

My mom later related that as he had finished his breakfast that morning, “Amazing Grace” came on. He listened for awhile and said, “I love that song” before going into the family room for the final time.

And it is precisely because of the amazing grace of our beautiful God that I will see my dad again when we meet in Heaven.

This is the last photo taken of my dad. I took this on a Tuesday and he had his heart attack that Friday:

(If you look closely, you can see Julia hiding next to the sofa). 🙂

He has been gone for nearly nine years now and I miss him everyday. I miss his sense of humor, his advice, his stories, his seemingly endless knowledge of trivia, his incredible wisdom. To this day, I regret that I didn’t speak at his funeral. I wanted to but I just didn’t have it in me at the time. So, this is my way of honoring my dad’s memory in a way that I didn’t  get to do on that day.

The most amazing thing happened just as I was finishing this post.

My dad loved to sing. He had a deep, rich voice and he sang constantly. One of his all-time favorites was the classic song “Smile” by Nat King Cole. I have so many memories of him singing that tune.

I had just finished writing about how much I miss him…when one of the contestants on American Idol began to sing… “Smile.”

I froze and immediately began to weep. It was as if Dad had literally just walked into the room. The TV singer’s voice faded and all I “heard” was my dad singing.  I just sat still and let the tears fall.

Smile though your heart is aching

Smile even though it’s breaking

When there are clouds in the sky, you’ll get by

If you smile through your fear and sorrow

You’ll see the sun come shining through for you

Light up your face with gladness

Hide every trace of sadness

Although a tear may be ever so near

That’s the time you must keep on trying

Smile, what’s the use of crying?

You’ll find that life is still worthwhile…if you just smile.

I will close this post with a photo of the lady who made my dad smile more than anyone:

Happy birthday Dad! I love you. And I can’t wait to see you again.

Filed under Tribute To My Dad