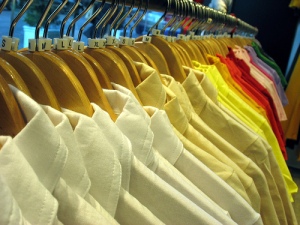 In light of this post and of course, this one, I no longer see any day as “ordinary.”

I have discovered that when I live a life of gratitude for even the smallest things, the world around me comes alive with a joy that shimmers…and dances…and celebrates…and beckons me to take one step further…because there is always more.

Joy can be found even at a Marshalls store on a Saturday afternoon.

My daughter was on a hunt for the perfect pair of jeans.

Two trips to two stores on Friday afternoon with me had yielded no results, so hopes were high on the ride to  the local Marshalls.

The ride itself is a beautiful one, courtesy of the majestic mountain views. I took it all in as the four of us joked, laughed, and discussed current events while eighties music played in the background.

Doug, Josh, and I finished our shopping well before Julia did, so we all met up in the ladies department. She had found the jeans fairly early so now the search was on for some cute tops.

I did not offer to help because when I had tried to do so the previous day, holding up what I thought was darling for her approval, I was met with such comments as:

(All of these comments were made with copious eye rolling, followed by a plea to be allowed to shop in peace).

So, it was with great interest that I watched Doug walk over to Julia, stand beside her, and begin to go through the racks.

I called out, “What are you doing?”

Smiling, he looked over at me and said simply, “I’m helping.”

Julia’s face registered initial surprise, followed by a big smile as she allowed her dad to offer assistance.

I was so touched by that moment.

It was so small…but so significant.

I love that he cares…not just about the big things, but the little ones too.

A tiny smile continued to play on Julia’s face as she and her dad searched side by side.

It was an endearing sight.

Eventually the perfect top was added to the perfect jeans, birthday money was spent…and a sweet memory was made.

Never underestimate the power of a small gesture…sometimes that speaks louder than a grand one.

(By the way, I did feel slightly better that nothing Doug chose made the cut either.) 🙂

“Do not disdain the small. The whole of life…is made up of the minute parts, and if I miss the infinitesimals, I miss the whole.”–Ann Voskamp

Filed under Friends and Family, Joy

4 responses to “Smile on Aisle Five”