I have been blessed with so many special people in my life. Here are just a few:

This is my mom, Mabel: 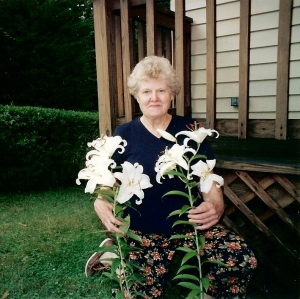 She is a wonderful mother. She always told my brother and me that we could tell her anything. She warned us that she might cry (and she did!) but she was true to her word. What an incredible gift to bestow upon your children…we knew that our voices would be heard.

She is also a prayer warrior. One of the greatest gifts she gave me was to begin praying for my future spouse when I was still a little girl. Once I got to know Doug and he told me his story, we could both see God’s hand upon his life, guarding and guiding him…in response to the  faithful prayers of a woman he had never met from a small Pennsylvania town.

I am giving my two children this same priceless gift.

These are my dad’s last remaining siblings: my Aunt Dot (who you read about here) and my Uncle Duane:

Uncle Duane is an WWII Army veteran who enjoyed a long and distinguished career as an accountant in downtown Pittsburgh. He owned a beach house in Myrtle Beach, SC, which provided our family and friends with years of fun in the sun. He is one of the most selfless, kind, giving people I have ever known and has been the greatest cheerleader of his nieces and nephews.

Aunt Dot is a delightful enigma. On one hand, she is a very classy, refined lady. And on the other, she will do such things as spontaneously hop on the backseat of my cousin Kenny’s motorcycle for a quick spin around the block—when she was 80; tear up the dance floor at family weddings; and cheer passionately for her beloved Steelers. She also makes no secret of her love for bald men, jeeps, and the super- tight pants of pro football players.  🙂

This is my Aunt Evelyn:

To this day, she remains the most beautiful person I have ever seen in real life.

I struggled terribly with the “ugly duckling” image when I was young. I adored Aunt Evelyn. Not only was she  funny and kind to me but she was so glamorous. All I wanted was to wake up one day and look just like her. Since that obviously wasn’t going to happen, I tried to imitate her as much as I could.  I especially loved the scents she chose and prevailed upon my parents to buy them for me. How my mom must have smiled when I went off to school in a cloud of either Angel Fire or Celadon, feeling oh-so-sophisticated. 🙂

Here is a photo of my friend Tracy on her wedding day in 1989. Tracy was the subject of my first post: 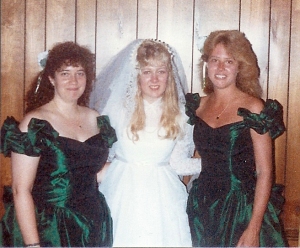 That’s me on the right and our friend Amy on the left. Tracy and I were best friends since we were five years old. We spent countless hours together. She was an only child and I didn’t have a sister, so we decided that we would be sisters to each other. It was only natural that I would be her maid of honor when she got married. She would only live seven more months after this day, which was a gloriously joyous one for her. I am so happy that she got to know what it was like to be a bride. I still miss her to this day.

Below is a photo of my family and my second parents…Carolyn and Dale:

I have literally known them all my life. They lived next door to us and their kids, Rob and Linda, are my oldest friends. Most of my childhood memories involve them one way or another. Our families were there for each other through the good times, as well as the heartbreaks. We even took vacations together. We were truly family.

In August of 2008, we had gone back to PA for a hometown visit.  This photo marked the last time my family and I saw Carolyn. She died  suddenly eight months  later. I miss hearing her cheerful, “Hi Suz!” when she would call to update me on what was going on in the neighborhood or with my former high school classmates.  Dale was one of my dad’s best friends and he posesses a quiet and dry sense of humor.  My life is richer because this special family has been such a big part of it.

“Friends are relatives you make for yourself.”–Deschamps

And lastly, but certainly not least, this is my brother Jeff (with a 6 year old Josh):

Jeff is four years younger than me and for most of the time when we were growing up, we really didn’t have too much in common. Fortunately, that changed when we became adults. However, Doug and I moved away after we got married, so we only saw each other sporadically. It wasn’t until he decided to move to Florida with us after our dad died that we truly became friends.

I absolutely adore him. As anyone who knows him will attest, he is one of the funniest people ever. He can make me smile on even my roughest day.  He and I amuse ourselves endlessly by quoting obscure lines from movies we have seen ages ago. He loves to sing “Cause I’m A Blond” to me every time I say something a little ditzy (which, unfortunately is often!). He is a wonderful uncle to my kids and a fiercely loyal friend. We have been there for each other through thick and thin. I am doubly blessed to have a brother who is also one of my very best friends.

Good thing too…he knows too much! 🙂

“Rejoice with your family in the beautiful land of life.”–Albert Einstein