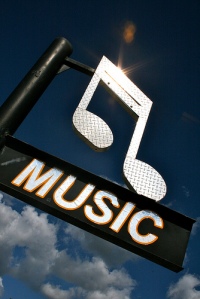 As Forrest Gump famously said, “Life is like a box of chocolates. You never know what you’re gonna get.”

This afternoon, I found that to be true.

Earlier today, I ran into the post office, trying to dodge the raindrops and protect the package I had to mail. A young man came in right after me and we got in line behind the person who was already at the counter. He was a tall African American with an enormous diamond earring in his left ear and rings on almost every finger.

He was earnestly explaining to the postmaster that he was a rap singer and had just made a CD. His plan was to send the CD  to various record companies in hopes that he would be discovered and make it big. But first, he had to send the CD to his own address with the dated postmark for copyright protection.

As the transaction was being processed, the guy behind me said, “Hey man, why don’t you sing us one of your songs?”

To my surprise, the rapper agreed and began to perform!

Right there, in the lobby of a post office on a rainy day, three of us were treated to an impromptu concert as this gentleman rapped his heart out. The tiny size of his audience clearly didn’t matter. He performed  like  he was playing Radio City Music hall and put his whole heart into it.

It was the last thing I expected to encounter when I left home to run some errands!

Our small northern New England town is home to a little over 6200 people.  The nearest big  city is over two hours away. It is 97.91% white and the median age is 42 years. The largest population consists of people between the ages of 45-64.

Not exactly a rapper’s paradise. 🙂

We all showed our appreciation for his music and as I stepped up to the window to mail my package, the  customer behind me  said, “We’ve all got a song inside us…and everybody has a dream.”

I thought that was beautifully said…and very true.

Everyone you see has a dream.

Do you know the dreams of those closest to you?  If not, I would encourage you to find out. Their answers may surprise you.

As far as your own dreams, are you pursuing them with passion?

Do you treat obstacles as road blocks….or as stepping stones?

Are you also pursuing your dream in an unlikely place?  If so, you don’t have to be defined by your surroundings and circumstances.

Just as this rapper did this afternoon…when the opportunity arises (no matter how small)…seize the day! 🙂

“Dreams are like the paints of a great artist. Your dreams are your paints; the world is your canvas. Believing is the brush that converts your dreams into a masterpiece of reality.” –Unknown