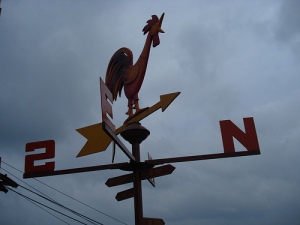 When Doug and I were looking to buy our first home in 2000, we found two houses that we liked.

We had no idea which house to buy. Which one was God’s best for us?

One night I went to church for a meeting and told a friend about our dilemma.

Her answer shocked me.

She said, “It sounds to me like God is just letting you choose between the two.”

She walked away and the meeting began but I didn’t hear much of what was being said. No one had ever said anything like that to me before. Didn’t God have a specific house He wanted us to choose? What if we made the wrong decision and bought the wrong house?

I went home and told Doug what my friend had said. He agreed with her. So, we chose the house we liked best and moved in shortly thereafter. It was the perfect house for us at the time and we filled it with many wonderful memories.

I thought of that time in our lives this afternoon when I listened to James MacDonald teach a series on God’s will.

According to James, “God doesn’t have a detailed blueprint for your life that you have to figure out.God’s will is not anchored in the minutiae of this temporary life. God’s will is about bigger things, more eternal things. God’s will is about the kind of person you are…’The will of God’ is mentioned 27 times in the Bible and every single time it is speaking about the moral will of God (God’s Word…His prescription for how to live this life)  or the sovereign will of God (He is in control and nothing can thwart His will)…the Bible gives no plan for discovering God’s individual will for one’s life.”

James rejects the idea that there is a “dot” that God has in mind for each of our lives and it is our job to figure out where the dot is and get on it.  This leads to much pain, heartache, and stress, as we worry about whether we’ve found the dot and  then worry about falling off. Rather, Ps. 31:8 tells us that God has set our feet in a spacious place. James said, “You are not in danger of falling off the dot and missing God’s best for your life. Get free from that!”

God does care about the decisions we all make (Ps. 31:3) and of course, He knows our every single decision,  but His primary concern is our relationship with Him. His most important plan for your life and mine is for us to have intimacy with Him: “You will call on Me and come and pray to Me and I will listen to you. You will seek Me and find Me when you seek Me with all your heart.”  (Jeremiah 29:12-13). After all, He is Who we were created for.

What do you think? Is this new to you? Is it freeing to think that God will use you regardless of which job you take or  which college you choose, or which house you buy? That all He asks of you is to live in the security and freedom of His sovereign and moral law and not be paralyzed in fear that you will make the ‘wrong’ decision?

I still have some questions about this myself and plan to talk to my pastor about it. I’d love to hear your thoughts.