An Afternoon With The Greatest Generation

My son plays in a band called New Horizons. It is an international organization that was established for the purpose of giving adults who have always dreamed of playing an instrument an opportunity to do just that.

At 16, Josh is the youngest member of the band but he loves it. He enjoys the people and it gives him another venue to play his beloved oboe.

This past Saturday was their first concert of the year and it took place at the local Veteran’s Home.

The band arrived an hour before the show to practice. Some of the residents came early so they could listen in, including one man who seemed particularly excited to be there. He asked the aide to wheel him right up front and his face was wreathed in smiles.

However, it soon became apparent that he didn’t understand that the band was only practicing. As soon as they would begin to play, he moved  his arms enthusiastically, as if he were conducting. But when the band would stop in order to go onto the next piece of music, he would drop his hands back into his lap and plead loudly, “Continue! Make melodies!”

When this happened a couple of times, an aide walked over to him and explained that the band was just practicing and the concert would begin soon enough. He waited patiently from that point until the concert began. Once it did, he continued to “conduct” with abandon and joy. The look of sheer happiness on his face was wonderful to see.

What beautiful faces of two brave women who chose to step up and serve our magnificent country during WWII.

In a room full of mostly men, their lights shone brightly.

I so wanted to hear their stories but uncharacteristic shyness kept me in my seat. Instead, I asked one of the aides where the women had served. I was told that some were nurses, some served in the Women’s Auxiliary Air Force, and one of the women was actually a gunner on a battleship!

The room was full by the time the concert started. 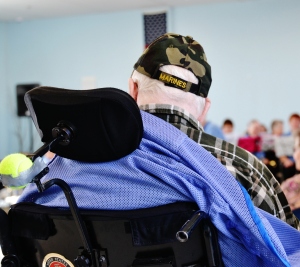 When the band played the service anthems for each branch of the military, the veterans were asked to raise their hands when the song representing their branch was played. Hands shot up proudly all over the room.

As the first strains of “National Emblem” filled the air some felt the need to stand (most with great difficulty) and salute the flag at the front of the room. 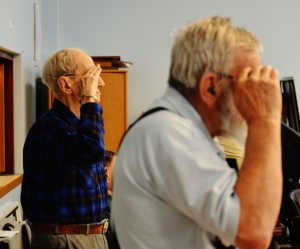 Tears filled my eyes as I watched these great American warriors proudly salute. I felt so honored to be in the same room with these incredible men and women. My father served in the Korean war and both of my uncles saw combat in World War II. They are my heroes.

Will America ever see such a spectacular generation again?

I wanted to personally thank and shake every single veteran’s hand once the show ended.

Someone I was thrilled to meet was the “conductor.” His name is Robert and he served with the Navy. I was able to shake his hand and thank him for his service.

He was very intent to meet the band’s conductor, Mary.

He thanked her over and over again for coming to the home.

I am continually amazed at the power of music to unite people, to soothe, to bring joy, to cause one to go back and relive times that now exist only in the memory.

It was a wonderful way to spend a few hours on a Saturday afternoon. I am so grateful for the band members for giving of their time and talent to bring such joy to these men and women who have given so much.

16 responses to “An Afternoon With The Greatest Generation”