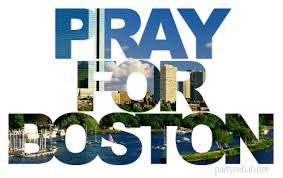 The first hint that anything was wrong was when I checked my news feed on Facebook.

One of my friends mentioned that something terrible had happened in Boston.

I immediately turned on the TV and pictures of horror filled the screen as my eyes filled with tears.

Terrorism, I thought, despite the anchor’s attempting to reassure the viewing audience that it could have been some kind of natural event, such as a gas explosion.

Ironically, my husband and I had watched the movie Zero Dark Thirty (about the capture and death of Osama bin Laden) the night before, so the horrors of terrorism were fresh in my mind. Such unspeakable evil is impossible to fathom.

After an hour of watching news coverage, I had to get out of the house. I grabbed my keys and headed out into the sunny spring afternoon.

I needed to see my kids.

I opened the windows to capture the fresh spring air and took several deep breaths.  I played Steven Curtis Chapman’s song “Beauty Will Rise” which is one of my go-to songs when I feel overwhelmed by hard things. It is a song of fierce, defiant hope in the face of tragedy.

On the short drive to the high school, I took in the sights of the beautiful town that I am blessed to call home.

An elderly couple strolled along the lake hand in hand.

A little boy was excitedly baiting his hook in anticipation of a fishing expedition, while his mother looked on with obvious delight.

Another boy was helping his dad unload two kayaks from the back of a pickup truck. The ice is finally gone, beckoning the hardiest of souls to come and christen a new season of water fun.

One of the local ice cream stands in town had just re-opened for the season on Saturday. This day several patrons sat on the multi-colored picnic tables enjoying their creamy treats, a tantalizing preview of the summer days to come.

As I drove up to the high school track, the first person I saw was my son.

I burst into tears.

I parked my car in the student parking lot that overlooks the track where the team was practicing.  I searched for my daughter, finally spotting her  throwing the javelin on the far-way field. I was grateful that she had chosen to wear a neon-pink shirt that made her easier to spot, as these middle-aged eyes of mine are not what they used to be.

My tears fell as I watched the team, still blissfully ignorant of the evil that was unfolding a mere two hours away from our town.  They were full of the life, energy and joy that teenagers can bring into our worlds.

One of the javelin throwers ( known by all for his high-wattage, fun personality) twirled his javelin like it was a baton. (That made me smile) .A relay runner crossed the finish line after a practice run and immediately began to dance in the football field, her blue baton gleaming in the sunshine as she twirled. Two of my son’s friends ran competitive wind sprints, the one holding out his hand in congratulations to the other who had crossed the finish line first.

Frequent bursts of laughter were carried on the wind and into my car…a balm for my soul.

I headed for home. This time, I took the back way and drove past the smaller lake that is graced by the afternoon sun. It looked as if someone had sprinkled diamonds all across the surface of the water. The water was calm, smooth…the complete opposite of the churning that was going on in my heart.

I was still listening to “Beauty Will Rise” on a loop.

I tuned into the bridge of the song:

I can hear it in the distance
And it’s not too far away
It’s the music and the laughter
Of a  Wedding and a Feast
I can almost feel the hand of God
Reaching for my face to wipe the tears away
And say,”It’s time to make everything new.
Make it all new.”

If these words seem mysterious to you, look up Revelation 19:6-9 and Revelation 21-22. These passages invite us to eavesdrop on a coming day when evil is permanently vanquished and peace and love and  beauty and light will reign for all eternity.

Darkness. Does. NOT. win.

The Light shines on in the darkness, for the darkness has never overpowered it. —John 1:5

Pray for the people of Boston.

2 responses to “Pray For Boston”