The Empty Nest Chronicles (Part I) 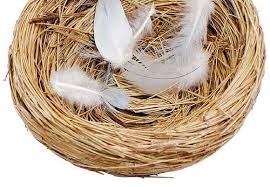 I discovered this weekend that I am not as tough as I thought I was.

My kids left Friday morning for Canada with the high school band.

I envisioned myself meeting this day with deep serenity and a  calm spirit.

Instead, I was up early, making sure they had packed properly, had all their electronic and charging devices, passports, snacks, Canadian money, etc.

My husband told them something, then I would repeat it until he (gently) said, “Susan. Stop. It’s okay.”

So I sat down, rather than following them around and watched the scene unfold around me as Josh and Julia got ready to leave in a last minute flurry of activity.

There were hugs and a round of “I love you’s”…and then they were gone.

And a part of my heart went with them.

I headed upstairs to have some quiet time, opened a book, and found this photo of a three year old Julia.

That’s when the tears began.

“For crying out loud,” I told myself. “Get a grip! They are only gone for a weekend!”

True. They were only a four hour car ride away in Montreal.

But they would be in another country. And since I don’t have a passport yet, I could not get to them easily if I needed to. That was what felt strange to me.

My kids were traveling to another country where they would have all kinds of fun and exciting experiences…without me.

That is the way it should be. As parents, we work ourselves out of a job. That is good and that is right.

Yet this trip was a reminder of just how fast our years of parenting had gone and that our kids were on the threshold of venturing out on their own to make their mark in this world and live their own stories.

Parenting is without a doubt the hardest job I have ever (and will ever) have. Nothing has made me feel so inadequate, exhausted, and imperfect. Or so exhilarated, joyful, and blessed.

Our son Josh is the strongest-willed child I know. He was  a generally sunny kid but when he wanted his own way, watch out! He intended to get it.

My mother was an absolute God-send to me here. She would counsel me, “Stand firm! You have to establish clear boundaries, that you are in control and he is not. If you don’t do the hard work now, it will be too late when he is fifteen and taller than you. Keep it up!”

So many times, it would have been much easier for us to just give in to our little red-headed tyrant but my mom’s encouragement (and lots of prayer!) gave us the backbone to do our jobs.

As a result, Josh is an absolute joy to us as a seventeen year old young man. God has taken that strong will and channeled it into someone who is extremely motivated, goal-oriented, and principled. He has many friends from all backgrounds, and his sense of humor, as well as dead-on impressions, keeps us all laughing.

Our daughter Julia was a bundle of curly, red-headed sunshine. Her blue eyes sparkled with life and joy and the sound of her giggles filled the house at all hours. She was passionate about  any and all animals, loved vanilla ice cream, and called me “Mama.”

Today, she is both an athlete and a girly-girl, our social butterfly, a musician, and is unafraid to zealously defend her views on a variety of topics. Despite having been a teenage girl myself, I really wasn’t prepared when my sunny girl began to display moodiness, sometimes act as if I were personally trying to ruin her life, and engage in copious amounts of eye-rolling.

It is a bumpy road ahead but I do enjoy the times when I get a glimpse of that sweet little girl again. I love that she still calls me “Mommy” even though she is fifteen and a half.

The late Rich Mullins once wrote a song entitled “We Are Not As Strong As We Think We Are.” I thought of that song as I wiped away my tears and got on with my day.

I was so grateful that even when my kids cross the border into another country and I cannot go with them, that Jesus— who knows no barriers— does.  That knowledge brought such sweet peace to my heart.

This summer, both of our kids will be gone for weeks at a time. I figure this weekend was a trial run for that. I am happy to say that I passed with flying colors. 🙂

Several people asked how Doug and I did with the empty nest this past weekend. To be continued tomorrow!

What about you? Are you an empty nester? How did you deal with it? Any advice is appreciated!

One response to “The Empty Nest Chronicles (Part I)”