A Tale Of The Tails 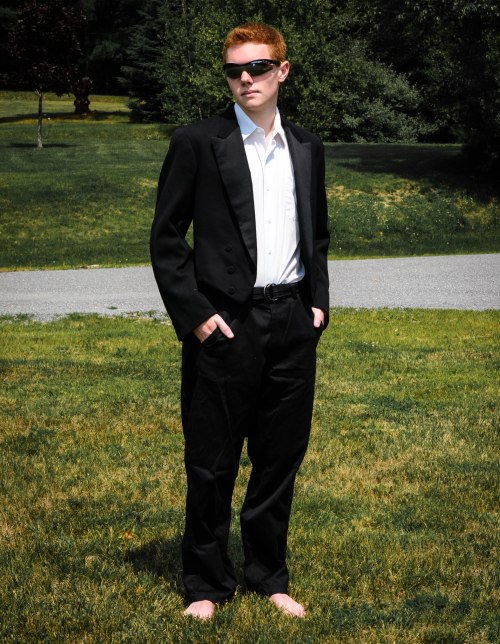 The local high school prom was two months ago.

Our son Josh had long wanted to wear a pair of tails for this momentous event, but it was not to be. He was incredibly disappointed.

Fast forward to this morning when he and I walked into our local thrift shop just to look around.

As soon as we walked upstairs, it was as if the heavens opened up and shone a beam of light on a fabulous find: a jacket with tails!

As soon as Josh tried it on and realized it fit, he made a beeline for the checkout with a huge grin on his face.

“What are you going to do with it?” I, being the ever-practical mother, asked.

“Wear it to the first day of classes at college, of course!” was his reply.

“And then on the second day of classes, I’ll just wear a T-shirt and jeans.” He grinned. “Keep ’em guessing, you know.”

As I followed him out to the car, I found my voice and said, “Are you really going to do that?”

He gave me a look as he hung up the jacket in the back seat. “Do you really have to ask?”

I guess I didn’t, I thought as we drove home.

Josh has always marched to the beat of a different drummer. He is a true original, with no interest whatsoever in fitting into any particular mold. He is always perfectly himself, one of those rare people who know from an early age exactly who they are and make no apologies.

He taught himself to play every instrument he currently plays (saxophone, clarinet, oboe, bassoon, piano) and parlayed that into playing in four different bands and making the All-State band. He wrote his first novel when he was a sophomore in high school and published his first collection of short stories last year. He will get up in the middle of the night and find himself inspired to write a poem. He learned how to crochet and sold his scarves and hats for a profit. He runs 5K’s and lifts weights. He made a documentary about his senior class and the guidance department is going to show it to incoming freshmen as part of their orientation. He does hilarious impressions and can make people laugh until they cry.  He has photographed one wedding and been the videographer at another one. He is a New Hampshire scholar. He is fluent in French.  He is a loyal friend. He does not suffer fools. He has wickedly funny sense of humor and can be snarky at times. He was baptized at our church when he was 16 years old and he loves Jesus.

Josh would no doubt agree that something Arnold Schwarzenegger said in his auto-biography: “What is the point of being on this Earth if you are going to be like everyone else?”

I am so proud of him. I am in awe of the fearless courage and joie-de-vivre with which he approaches life.

I asked him if I could take his photo in the tails when we got home and he happily obliged, knowing this was too good an opportunity for his photographer mother to pass up.

True to form, he also sported bare feet, which is how he enjoys walking through his days.

He also loves his grandma, who was thrilled that he found his long-awaited tails. 🙂 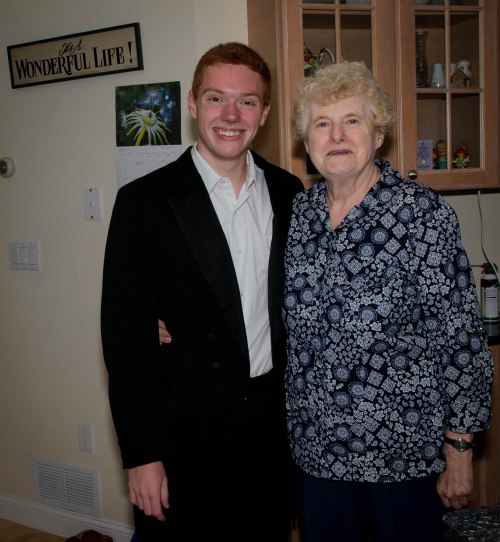 I sure am going to miss this boy when he leaves for college in three weeks.

And I wish I could be a fly on the wall during that first day of class.

2 responses to “A Tale Of The Tails”