The Many Faces Of Buddy

Ten years ago, we got a puppy named Buddy.

He is a Bichon Frise and he was 5 pounds of furry, white cuteness. 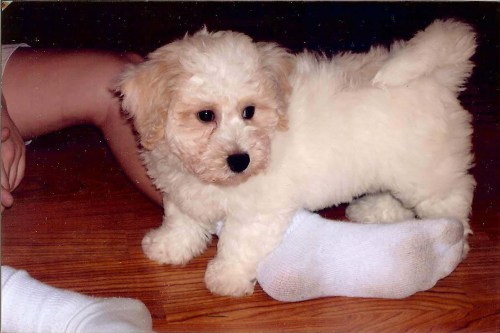 He was playful, fun, sweet-natured, and energetic. He may not be the sharpest knife in the drawer, but we all love him.

All of us except my husband, who tolerates Buddy at best.

Guess who Buddy loves more than anyone in the world?

As cute as he is, Buddy can be temperamental. When we are gone for longer than Buddy would like, he leaves us little “presents” as a sign of his displeasure.

Every morning without fail, he picks up his favorite toy, a blue rubber barbell, and walks all around the house whining loudly as if he has lost his best friend. This goes on for at least ten solid minutes.

The first time we left for a vacation, we innocently packed our bags and left them in the foyer to load into the car in the morning. Buddy promptly took one look at the luggage, somehow knew that that meant that we were leaving, and had a nervous breakdown. He drooled copiously. He vomited. He tried to attach himself to one of us, any of us, so that he would not be left behind. We assumed he would be fine once we left.

My brother (who was watching Buddy for us) called two days later, sounding exhausted. Buddy was such a nervous wreck that Jeff had barely gotten any sleep. Buddy was refusing to eat or drink. He was not sleeping. So, Jeff was forced to take him to the emergency vet ER, where they had to hook Buddy up to IVs to hydrate him and prescribe tranquilizers so he would sleep.

(After getting the bill, it was my husband’s turn to have a nervous breakdown).

When we lived in Florida, my brother thought that Buddy might enjoy running on one of the beaches that welcomed dogs. He was absolutely terrified of the sand and ended up vomiting everywhere…including all over Jeff’s truck.

Buddy never went back to the beach. 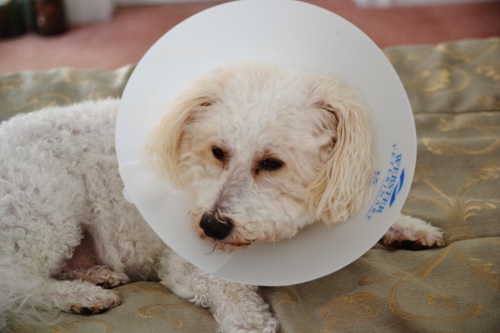 Buddy is wearing a cone here because in a fit of neurosis, he would not stop licking his paw, and all the fur was gone. This was our only remedy. (Well, that and some more prescribed tranquilizers).

Buddy always slept with our son until he went off to college. We assumed that he would then be happy to sleep with our daughter.

Buddy whined. Buddy scratched at the door.  At one point, Julia left her door open  and Buddy made a beeline for our room, only to be returned to his rightful place. He sulked.

Finally, one night, my daughter appeared at our bedroom door, clutching the white furball, declaring that she was desperate for sleep and could we please let Buddy sleep with us from now on?

We haven’t had a good night’s sleep since.

Every single night, Buddy leaps into our bed and proceeds to lick Doug’s face and wag his tail, so delighted to be with his beloved. The more Doug protests, the closer Buddy tries to get to him. He literally just sits there and looks lovingly at Doug, completely obliviousness to the hostility. Doug’s very existence seems to be his reason for living.

Despite being only 20 pounds, Buddy emits the heat of a furnace. He also tends to sleep sideways, taking up a large portion of a queen size bed. I have woken up more than once clutching the very edge of the mattress while Buddy snoozes away, blissfully unaware of the discomfort he is causing.

He also seems to think that my bright orange earplugs ( that I have to wear in order to continue to sleep in the same room with a husband who snores) are some kind of tasty snack. He literally stalks them. I will find him at various times throughout the day on my side of the bed, straining to reach them on my nightstand, then looking extremely guilty when he realizes he has been caught. Every other week or so, I forget to move them and discover they have vanished when it’s time to go to bed.

Still, with all his neuroses and ridiculousness, I adore this dog.

This afternoon, Julia decided to give Buddy a good brushing, which  is his second greatest love.

I grabbed my camera and decided to capture those moments. I swear, it was as if Buddy saw the camera and started posing (It is too bad that the groomer left his ears so long, which gave him an unfortunately girly look). 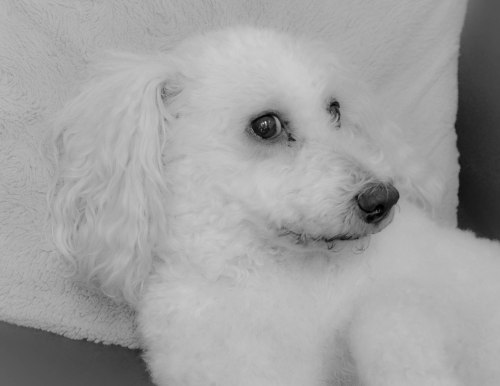 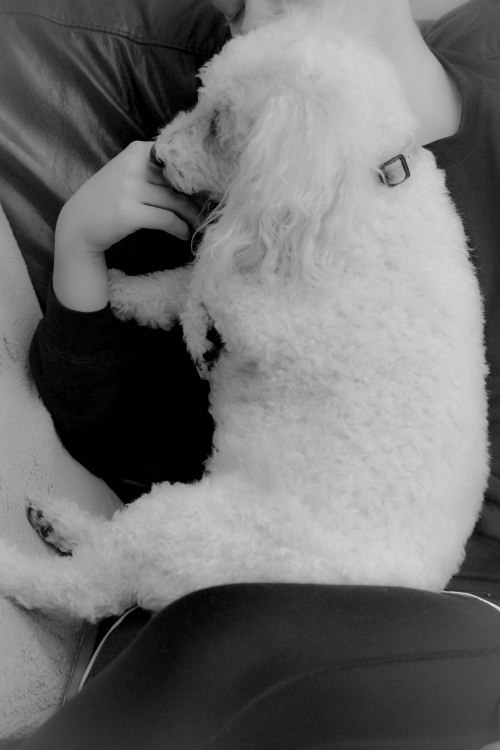 See? He is ridiculous, but I love him.

I posted these photos on Facebook and one of my friends wrote, “I hope he’s doing great. He sure is cute.”

That about says it all.