Two days ago, I wrote this post about seizing the day.

Little did I know that that truth would come to life the very next day.

It was Promotion Night at my daughter’s homeschooling co-op, which is always a very special night. The sanctuary is packed with family and friends as we all gather to celebrate the achievement of the kids as they are recognized for doing the hard work to advance to the next grade. 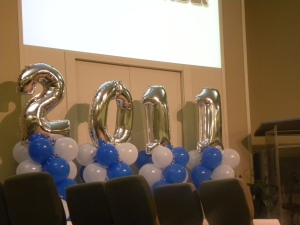 We were only one exit away from our destination. It had been raining quite hard and we were delighted to see a  beautiful rainbow, not only stretched across the sky but right in front our our vehicle! It seemed to rise from the wet road and shimmered right in front of us as we drove.

Suddenly…traffic that had been traveling 65 mph came to a screeching halt.

There had been an accident just ahead of us.

A tractor trailer truck had jackknifed across the highway, hitting two cars and slamming them into the guardrail. We narrowly missed hitting the car in front of us and having  the car behind us smash into our vehicle.

In the blink of an eye, life could have changed forever.

Watching the reaction of the man in front of us was interesting. He was highly irate. He got out of his car and paced all around, clearly frustrated that he was stuck in the middle of the highway. It was as if we could actually see his blood pressure rising.

That would have been me a few short years ago….but not that day.

Rather than fretting and fuming (which would have done no good anyway), I whispered a prayer of thanks for God’s protection. I prayed for the accident victims as we watched several ambulances arrive on the scene.

Forty-five minutes later, one of the lanes were cleared, allowing us to be on our way. (Later, we learned that no one was killed and injuries ended up being somewhat minor, fortunately).  It was a solemn reminder that every minute is precious.

When we finally arrived at the co-op, it was such a joy to enter into a celebration of life…milestones reached,  happy memories of years gone by burned into hearts and minds, fresh starts.

The night began by honoring the lady who has led the co-op for several years. Becky has served us tirelessly and passionately and this was her last year with us. One of the group’s quilters had the wonderful idea of making her a quilt as an expression of thanks for all she has done for us. Every family wrote a farewell message on one of the panels and then it was lovingly sewn together by the quilters. The end result was gorgeous:

The children in grades 6-11 were then called up to the stage by grade, one by one. They each received their promotion certificate and gathered for a group photo.

The seniors, clothed in cap and gown entered to “Pomp and Circumstance” and a standing ovation as they make their way onto the stage. Then everybody’s favorite part of the night began.

The parents of each senior previously record a 3 minute video montage of their graduate’s life. In the voice over, they share their favorite memories, their pride, and their hopes and dreams for their child as they prepare to take their journey out into the world. When the video ends, the senior comes forward and waits for his or her parents to ascend the stairs onto the stage. The parents then present their child with their diploma. After years of hard work, they all have made it. Homeschooling is not for the faint of heart. It is a triumphant moment.

Even when I don’t personally know the student, tears fill my eyes. It is such a beautiful thing.

There is one moment I will never forget. When the video montage for a young man named David began, his parents explained that they were told by the “experts” that since their son had been born with certain issues, he would not have a normal life and would certainly never  graduate from high school.

So much for the “experts.”

As the montage ended, this young man stood up and walked to the center of the stage.  Tears were unashamedly streaming down his face. His parents made their way slowly up the stairs. David’s mother has been quite ill and has spent much of this year in the hospital enduring serious surgeries.

I could tell by one look at this woman’s face that she is someone who fully knows and appreciates the power of a moment. Not only was she living a moment that she was told would never happen, but she was well enough to experience it.

The entire room erupted in cheers and applause as we all gave this family a standing ovation. I don’t think there was a dry eye in the house.

Eventually, all the seniors were officially graduated and turned loose on the world…but not before having a little fun with silly string. 🙂

A celebration commenced after the ceremony.

It was a lovely, if somewhat bittersweet evening… one that marked the end of  one season and the beginning of a new one. I am looking forward to the next chapter.

6 responses to “Rainbows and New Beginnings”