The Sound of Silence

My house is very quiet today.

It is a sign of things to come as a new season approaches. There is only one week left until my homeschooling days come to an end.

Doug is at the office, Josh is at school, and Julia is at play practice getting ready for the Little Women performance this weekend.

Right now, I can hear the birds singing and the drone of a plane flying overhead. Our dog Buddy is sleeping beside me as I type.

For over a decade, I have been the principal of “Brown Academy” (that is what we called our homeschool…very exclusive). :).  Our days were filled with a constant hum of activity.

Somehow, I thought those days would go on forever.

I don’t regret a moment of it. I was given the precious opportunity to spend the minutes and months and years with my children, watching them grow and learn and mature.

As I mentioned previously, I went into homeschooling with great trepidation, feeling totally inadequete for the monumental task ahead of me.

And I was. It was only by the grace of God that I was able to do it.

It was without a doubt the hardest thing I have ever done. But oh, how joyous it was!

I love the people my children are becoming and I consider myself privileged to have shared that journey with them thus far.

So many people have asked me what I will be doing in the fall and I don’t have an answer…yet.

I’m excited about a new phase, another chapter, a turning of the page.

But for today…the silence is loud…and as happy, noisy echoes from the past fill my mind, I remember…and give thanks for precious memories of times gone by.

To everything there is a season… (Ecclesiastes 3:1)

Since my part of the country got over six inches of snow today, I decided to take a  trip down memory lane to a warmer and sunnier time: specifically to June 2004, when we took the kids to Disney for the first time. Josh was eight, Julia was seven and my mom and brother joined in the fun.

We provided the kids with autograph books, just as my parents had done for me back in the 70s, and they were immediately on the hunt. Goofy was spotted first: 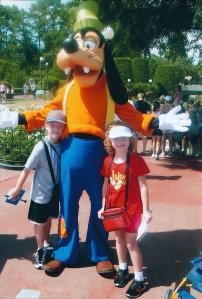 Followed by Chip and Dale:

They were both excited to see Pluto: 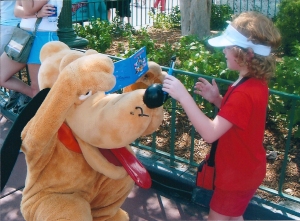 Julia then ran into Captain Hook and Smee, the pirate. Captain Hook would have been terrifying to me as a seven year old, but Julia was unfazed. She marched right up to him, with autograph  book outstretched…and he stole it and wouldn’t give it back! She danced all around, trying to jump and grab it, but he held it just out of reach, laughing all the while. I would have cried for my mommy, but she needed no such help. She just giggled and kept saying, “Give it back, Captain Hook!” He finally relented, signed her book, and handed it back to her. As soon as it was back in her hands, she hightailed it out of there: 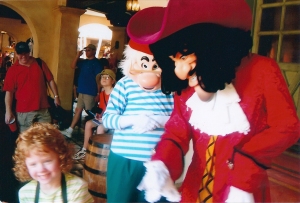 After giving her his autograph, he gave her a friendly nose squeeze before she went on her way: 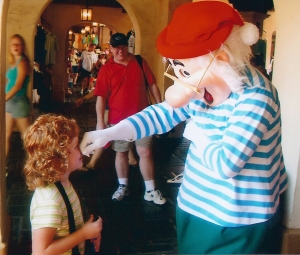 After all that, some time with Grandma was in order:

Meanwhile, Josh decided to take a drive with Uncle Jeff:

Then it was her turn to take a drive with Daddy:

She even had time to flash a quick smile for the camera:

After a fun-filled day at the park, we headed back to our hotel, which was based on all the old Disney movies:

And Julia needed some serious down time:

We were there for three days and it was absolutely wonderful. Disney truly is the happiest place on earth. 🙂

“Co-laboring over the sculpting of souls is a sacred vocation, a humbling privilege.”–Ann Voskamp

I have become one of those moms.

The kind who finds herself staring longingly at babies and toddlers with a sweet rush of nostalgia…followed by an urge to admonish the mother to cherish this precious time because it ends all too soon, like sand rushing through an hourglass.

That is exactly what earnest older moms would tell me when Josh and Julia were little.

I would smile politely, not believing a word of it.

But, oh how true those well-meaning words were.

I did catch glimpses of it. I distinctly remember one afternoon pulling into the parking lot at McDonalds in our small Rhode Island town. Each Tuesday, my friends and I would take the kids to McDonald’s for craft time. The kids were taught fun crafts while the moms had the chance to enjoy some coffee and adult conversation. Then we would all walk across the parking lot to the bookstore at the mall for “Storytime with Miss Lisa.” One golden spring morning, I held their small hands as we walked into the restaurant, listening to their excited chatter  and thought to myself, “Treasure these days. They won’t come again.”

Now that my children are teenagers, it would be easy to romanticize those days of diapers,  long nights and early mornings, sippy cups, spilled milk, sticky hands, boo-boos, car seats, high chairs, and play dates. To some extent, time does blur those memories. However, I know several young women who are in that stage right now and I easily recognize the exhaustion, the tired smiles, the  seemingly never-ending attempt to juggle so many roles with some degree of success.

During Bible study this week at my church, several precious young moms honestly shared the common struggles of young motherhood…particularly in a culture that tends to downplay and even deride the choice of those who choose to stay at home to raise their children.

I will never forget going out to dinner one evening with one of my husband’s work colleagues and his wife. Neither of them had children and both were enjoying thriving careers. Once they discovered that I was a stay-at-home-mom, their interest in me visibly waned. The conversation turned at one point to previous jobs…but they never even asked me what my backround was. They simply saw me as a mom and that was all…they dismissed me.

I wanted to defend my decision…to tell them that I possessed a masters degree, that I had lived 30 years before I had my first child…that I had had a life. 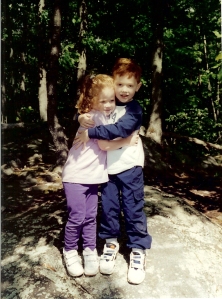 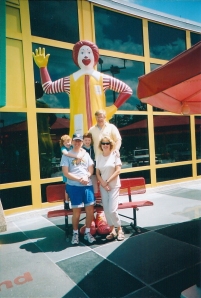 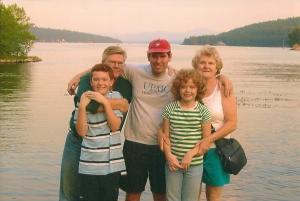 It is a life filled with such precious moments that I would not change one second of it…even the most difficult. And it IS difficult…there is no denying that. It is the hardest, most demanding  job most of us will ever do.

I spoke with a young mom last night whose husband is involved in a thriving ministry. Almost daily, he receives voluminous letters and emails thanking him for the amazing ways he has impacted lives. This is good and right, as he has been given an incredible opportunity to pour out his many gifts for the sake of building others up in their faith.

However, no one sends her effusive emails thanking her for the many hours she spends driving, cooking, wiping runny noses, helping with homework, mediating sibling disputes, doing mountains of laundry, teaching, reading, giving baths…all the many roles involved in being a mom.

Yet…and most importantly…there is One who sees:

*the daily choice to die to self

He sees you today, young mom. Treasure these moments…because I promise you, when these  hard and joyous days are over and live on only in your memory, you will miss them. So, fully enter the moment, experience it all and give thanks for the gift of your children.

“Children are the hands by which we take hold of heaven.”–Henry Ward Beecher