The ringing of the cell phone jarred me awake at 3:00 on the morning of December 19th.

My heart immediately began to pound when I saw my mother’s phone number.

When she told me to sit down, I knew it was going to be bad.

My cousin David had been shot and killed at the end of his watch as a PA police officer late that Sunday night.  He had pulled over a motorist with expired license plates. When he asked the driver to step out of the car, the man opened fire. He shot David in his left thigh. While David was lying on the side of the road, this man walked over to him and coldly proceeded to shoot him in the back of the head…thus brutally ending the life of a 46 year old father, brother, friend, cousin, veterinarian, conservation officer, and former fire fighter and emergency medical technician.

In that single moment, our family has been forever changed.

I was in absolute shock.

David was only one month older than me.

David and me with our dads, Ralph and Johnny

He, along with our cousin Gary (also born the same year) grew up together. They lived in the country and I lived in the suburbs. We were separated by 40 miles, so we didn’t see each other all the time but when we did, we had a blast together.

Gary, me, and David in 1987 (inexplicably David is wearing the same shirt!)

Each time David visited me, he would look around him and shake his head, saying, “I could never live here. I need to see the open spaces and the open sky.”

While the view out my window was typical suburbia, this was his view:

Through the years, David taught me to shoot a gun and ride a horse.

When he praised my shooting skills I knew it was a hard-won victory. My cousin didn’t mince words and never gave empty compliments.

He was less-than-impressed with my riding skills. 🙂

I had never been on a horse before and one day when I was at the farm, he decided it was time for me to learn. I was really nervous but he assured me that I could do it. Easy for him to say, as he had been around horses his entire life.

He helped me up onto the saddle, then swung onto his horse. He explained the basics, assured me that my horse was a gentle one, and we started out over the rolling Pennsylvania hills. Things were fine at first…until my horse inexplicably began to pull away and run.

I was terrified. I was yelling unhelpful things like “Stop!” and “Help!” when I wasn’t screaming.

David soon pulled up beside us and got the horse to stop. He looked at me with a grin and said, “You weren’t scared were you?”

I have never moved so fast in my life to get off that animal. Then I told David and as a matter of fact, YES, I had been scared! For good measure, I added that I was never going to ride another horse  by myself as long as I lived.

He smiled at me and said, “You know I would have never let anything happen to you.”

He helped me up onto the back of his horse and guided us back to the farm, while keeping one hand on the horse I had been riding. When we got back, someone snapped this photo:

(I never did get on another horse).

We shared a love of country music and went to see Kenny Rogers every time he came to Pittsburgh.

When he went off to college, we exchanged numerous letters. (This was obviously in the days before email and texting. 🙂 ).

We celebrated his 19th birthday together…

This is my very favorite photo of David and me:

The year was 1987. We had both just graduated from college and life was full of promise. He would go on to Ohio State to become a veterinarian and I was headed to graduate school.

By the early 90s, we were both married and kids soon followed: his son Ben and my kids Josh and Julia.  David realized his dream of becoming a veterinarian, eventually opening up his own practice. We saw each other mainly once a year when I came home to visit. I moved around a lot due to my husband’s job but he always called wherever I was and we would have long talks about life and love . 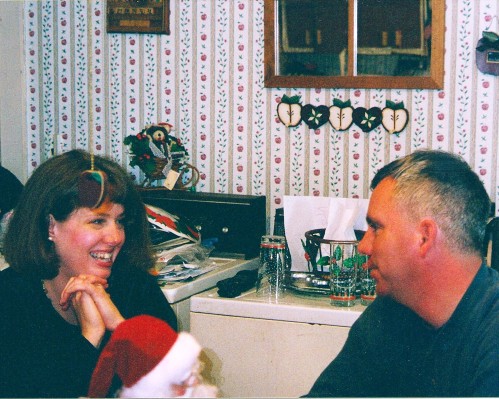 David was soon to realize another dream: to become a police officer, which he called “a noble profession.” (I think being a veterinarian is a noble profession too). He was at the head of his class at the police academy and loved working as a cop, which he did on a part-time basis when he wasn’t at his clinic.

He was living his dream, right up until the minute he died.

How many people can say that? How many people do you know who have done what it takes to realize their dreams? Who do more than just talk about ” maybe someday”? Who put in the time, the effort, the hard work to overcome the obstacles, the skeptics, the odds?

My cousin did that.

I boarded a plane the day after my mother’s phone call and flew to Pittsburgh. I had to be there to honor the life of my cousin. On the flight back to my hometown, my mind was filled with so many memories. The David I knew was kind, big-hearted, a huge lover of animals,  driven, compassionate,  and one of the funniest people I have ever known. He could make me laugh until I cried.

The last time I had seen him had been in July of this year when we attended a party for his parent’s 50th wedding anniversary. 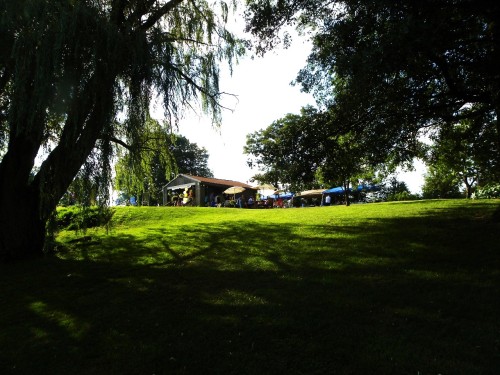 He greeted me with his customary bear hug. He looked happy. He had recently gotten engaged and was telling me that he was thinking of having a quiet wedding on the beach next summer. We fell into our usual routine. Even though it had been some time since we had seen each other, our conversation was easy and warm. As we shared a laugh, I told him that he was one of my very favorite people. Always has been.

I did have the fleeting thought that I should have someone take a photo of David, Gary, and me. However, there were so many people celebrating and I remember having the thought, “We’ll do it next time.”

Next time would never come.

David’s funeral was like nothing I have ever seen. Our family was overwhelmed by the support of the community.  The visitation hours at the funeral home had to be extended to allow all the hundreds of people inside who had come to pay their respects.

I was so touched by all the stories I heard about David. Fellow officers and longtime friends spoke of a friend who was always there for them anytime of the day or night. Former clients spoke gratefully of a veterinarian who was able to save their pets when they had lost hope. There were several elderly ladies who shared that David treated their pets, knowing  that they might not have the means to pay him.  They would ask him to bill them…but the bill never came.

Police officers from all over the country and the world were in attendance on the day of David’s funeral.

Much of the city was closed down that afternoon to allow the funeral processional free access.

David’s flag-draped coffin was carried to the church via carriage: 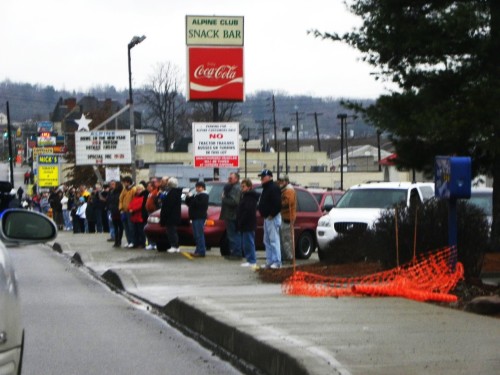 (Forgive the blurriness...I took this in the car on the way to the church)

Many were crying. Some men were saluting. Most men had taken  their hats off in a gesture of respect. It was incredibly moving. 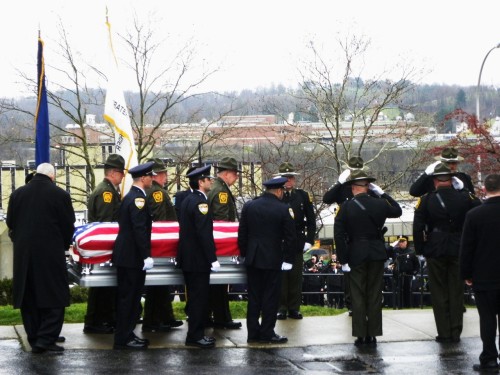 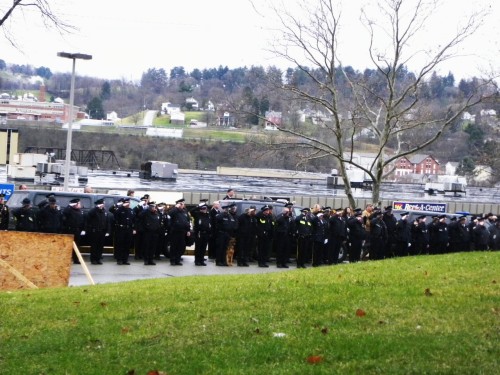 I don’t think there was a dry eye inside the church during David’s memorial service. His father John, sister Beth, and brother Dean spoke movingly about the man they loved so much, as did my cousin Gary.

But it was Officer Bob, one of David’s oldest and dearest friends (who was also his partner on the force and with him the night he died) who made me weep the most.

Bob shared that he first met David when they were in the first grade. Bob didn’t have any friends so one day on the playground, he approached David and with the raw vulnerability only the very young are capable of, asked, “Will you be my friend?”

Six year old David took a moment to consider this request and then said, “Yes. I will.”

So began a lifelong friendship of two men who were always there for each other, both on and off the force. Bob was David’s back-up that dark evening on the Pennsylvania highway. He watched in horror as David was shot and opened fire on the suspect, who then shot Bob in the hand. It was while Bob was wounded and trying to fight back that David was fatally shot.

Struggling against tears, Bob ended his eulogy of David by saying, “He is truly a hero and I will miss him deeply.”

Officer Bob is a hero too.

I, for one, am glad that David knew he was not alone; that his lifelong friend was there with him to the end, fighting valiantly against senseless evil.

My mom and I flew back to New England right after David’s funeral. I wept the entire way home, unable to really believe that I will never see my cousin again. The world suddenly seemed to be a very dark and scary place to me.

I was so grateful to find David’s letters to me from our college days a few days ago. 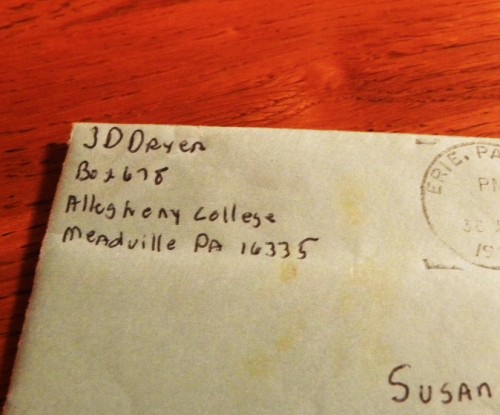 The tears flowed once again as I read the letters. David wrote just like he talked, so I could “hear” his voice. What a treasure it is to have this snapshot in time; to read the words of a young man full of dreams, hopes, and ambition. And what a comfort it is to know that the very dreams David wrote about all those years ago came true in his life.

My life was all the better for knowing David Dryer.

I will miss him, his friendship, his sense of humor, and his smile for the rest of my days. 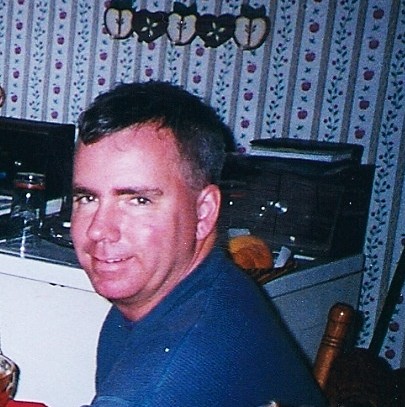 Treasure your loved ones. Don’t take them for granted for a single minute.

And please say a prayer for protection the next time you see a police officer making a traffic stop. God bless them and their bravery in putting their lives on the line every day to protect us.

“As long as we live, they too shall live
for they are part of us, as we remember them.”

Filed under Tribute to My Cousin David

12 responses to “A Fallen Hero”